What is a Shengcha? Maocha? And Pu’er Maocha? 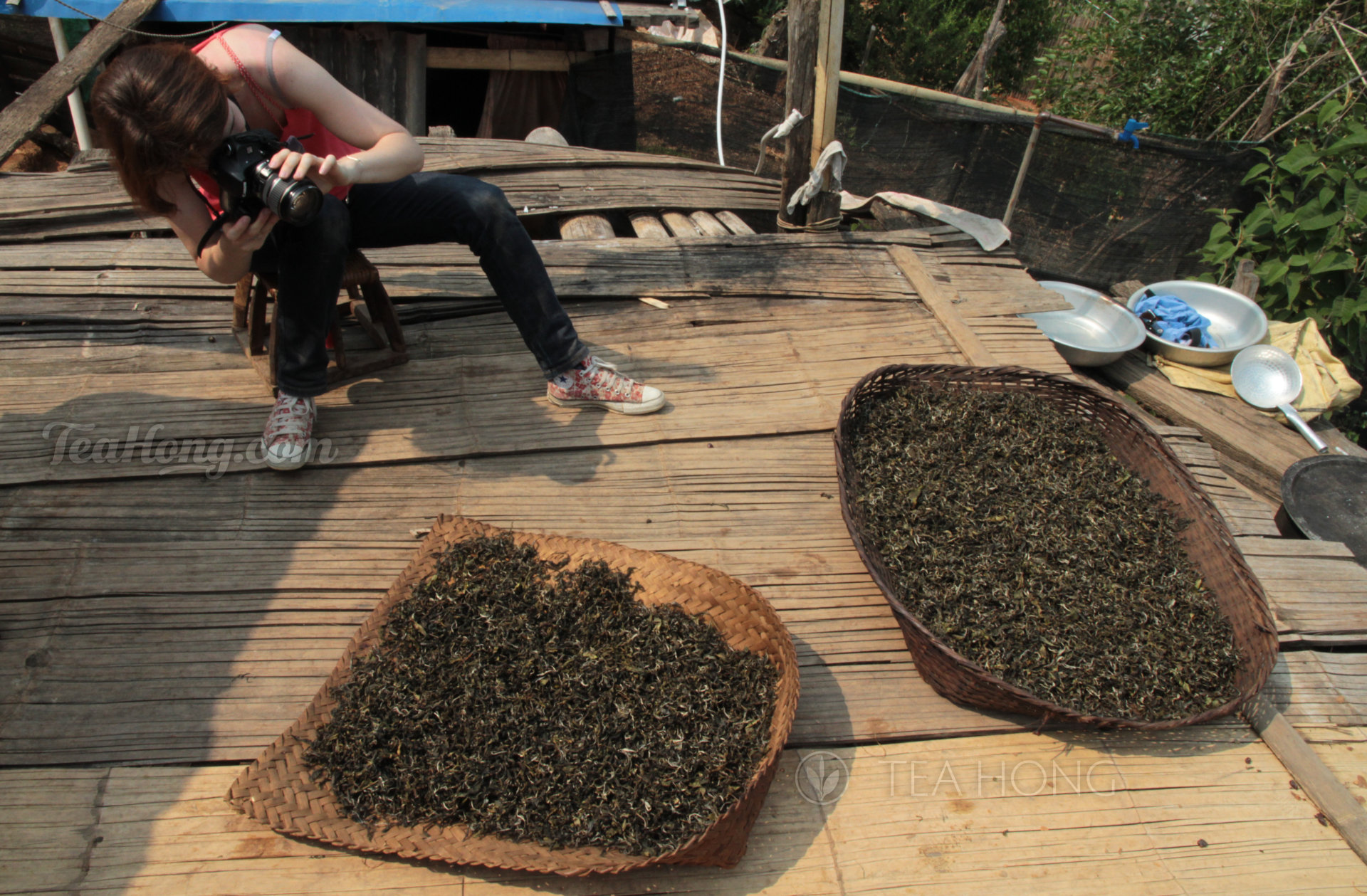 A client taking photo of maocha being sunned on the roof of the bamboo shed that was the home of a small local ethnic family. The daughter told me this was only for their own use. That is exactly the same way tea has been processed for centuries in this area.

The concept of shengcha was born when people began to define induced post-fermented teas as shu cha.

A post-fermented tea is also called a dark tea, referring to its original beginning, which according to historical documents, that tea produced in the southwestern regions in China were to be darkened to sell across the border to nomadic and mountain-dwelling people. That kind of trading had at least four centuries of history, if not a lot more.

In late 1960’s when traders in Hong Kong began a “wet-storage” method to quicken the darkening of tea, Chinese producers came for a study trip and quickly picked up the idea to systematically induce post-fermentation with the aid of moisture. It was at this time the concept of shu cha — ripen tea — came about to define the products of this “wet-process”. To differentiate the dark tea darkened “naturally” from this “new” method, the former is thus called shengcha — raw tea.

The perception that shengchas were better because they were more “natural” soon became a marketing idea to promote the raw materials themselves. Shengcha thus further evolved to define as well the maocha and the pre-darkened cha bings made from maocha.

So what is a shengcha? It is a product that is made by sunning the freshly plucked tealeaves for an extended amount of time. That is pretty much like the prehistoric way of drying ( and inevitably allowing oxidation/fermentation in the duration ) virtually all food materials for longer storage time. Historically, this raw tea material was compressed into discuses, blocks, tubes, etc for easy storage and transportation.

Nowadays, after sunning, a wok-roasting to initially dry the tea.

Some manufacturers do further bake the tea for complete dryness nowadays, for commercial purposes. However, this does kill off all remaining enzymes with the leaves and the natural further internal oxidation will not exist. Most importantly, a healthy natural post-fermentation will not occur. All these will render the tea more like a green tea than a mature-able old style pu’er tea.

What is a Maocha

Maocha — pre-finishing tea — was originally a generic label for any tea that has gone through major processing except for the final steps of sorting, de-stemming, and finish-baking. Green teas, black teas, oolong teas and even some white teas all have their maocha stage. The term is now perceived by the consumers specifically for the raw materials for producing pu’er teas or other dark teas. Previously such “raw” teas are rarely accessible, but with the general awakening in the market, and because of the unique taste characters of these leaves, the subcategory has gradually gained momentum.

As an old trader, I’d prefer to call maocha of pu’er as pu’er maocha, in the old style of differentiating various categories and varieties of maocha.

There are people in the trade who prefer to call this sheng pu’er, or sheng puerh. However, I think that would be quite confusing as naturally post-fermented pu’er is called shengcha, as explained. Even though pu’er maocha will gradually acquire natural post-fermentation too but that is not the original intent of it as a final product. We have also aged ours carefully to differentiate it from other shengcha so it retains its wilder nature.

Pu’er maocha in the loose leaf form matures quite differently than when it is made in the compressed form. Amply aged loose leaf maocha acquires a unique taste profile. So much so that we think it is worth a subcategory of its own.