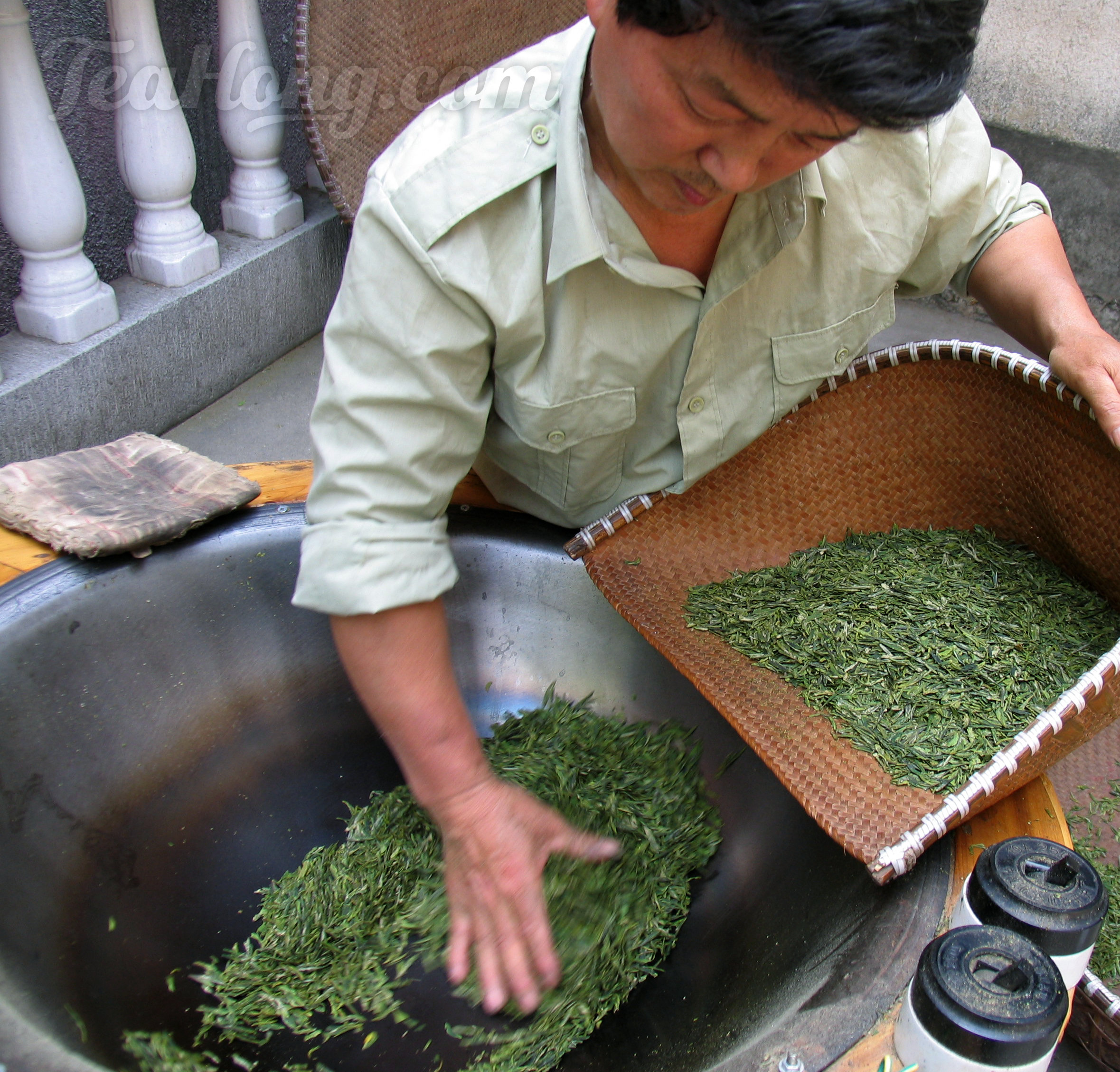 After the second roasting, the leaves of this Tu-zhong Longjing are being scooped back into the bamboo ladle to cool down. ( The Lu family farm, Mejiawu, Hangzhou )

When I began drinking tea more seriously, there was only one kind of Longjing, and the difference would be quality or whether it’s genuine.

Since the 90’s, however, a new type of Longjing has prevailed — Longjing 43. The dry leaves smell nicer, and look healthier, tidier, and fatter than what used to be.

It is actually good for novice drinkers. The initial aroma is much easier to appreciate, the taste a lot softer while still having a similar profile as the original Longjing. In most popular teashops in Hangzhou today, it fetches top prices.

However, it is still far from the intricacies and depth of the good tea that is the original Longjing. 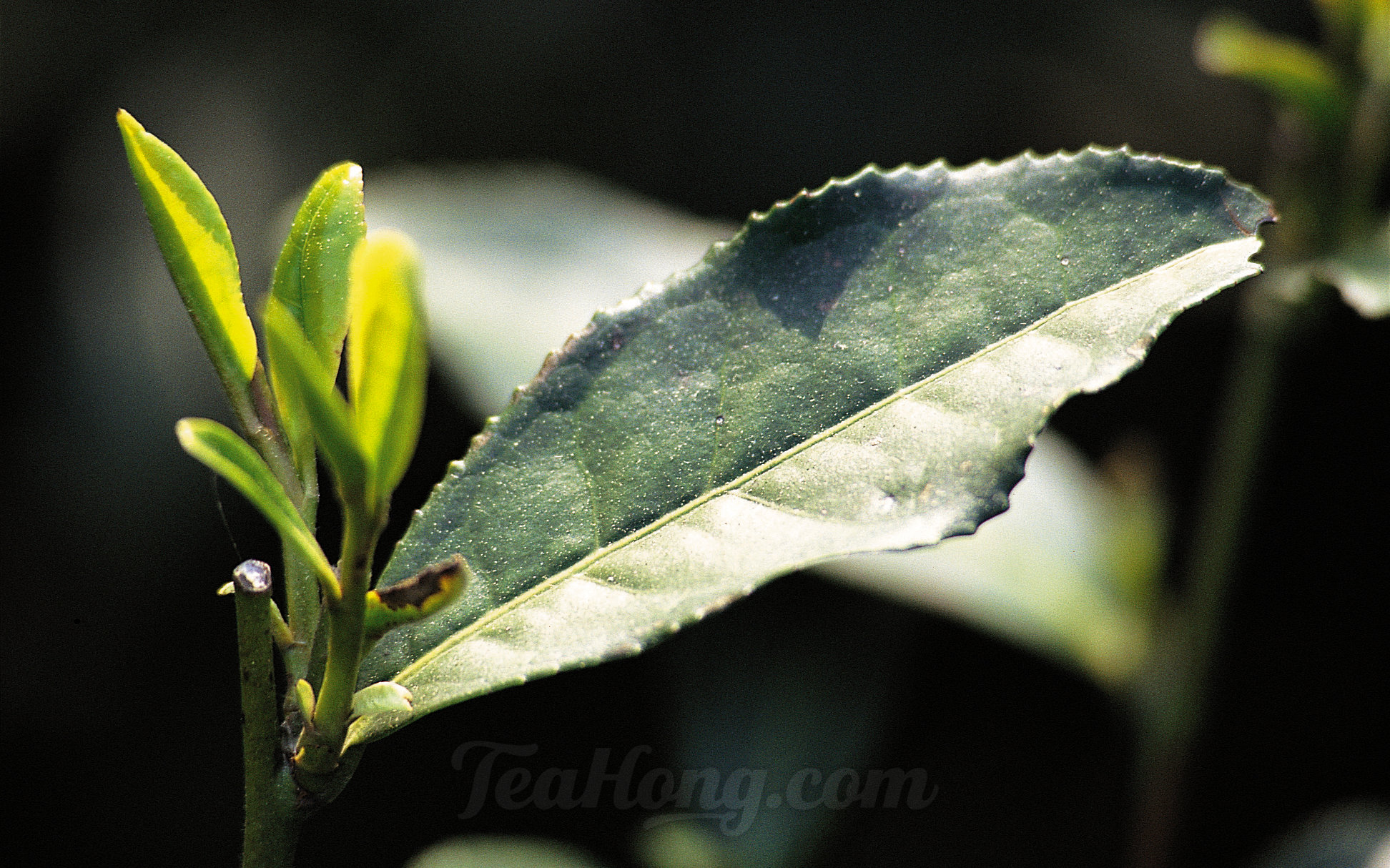 The “original” Longjing refers to the indigenous cultivar that the first Longjing was created from and gotten famous with in the Qing Dynasty. Reference books refer to it as “Qunti-zhong” ( or sexually propagated type ). Farmers call it “Tu-zhong” ( the native type ). Today this tea cultivar is planted only around Xihu ( West Lake in Hangzhou ) in traditional farms. Newer farms usually produce with #43 or another newly developed type, Chang-ye, both of which yield new leaves sooner than Tu-zhong, and thereby can dominate a market that blindly follow the idea of the earlier the better quality. That’s why a lot of the times leaves from the cultivar “Wu-nu-zhao”, which can come about as early as late February, and which is planted in nearly all green tea regions in China, are often used to make fake Longjing that fetches top prices. Ignorance is a bliss — i.e. The market’s ignorance is a bliss for the profiteering merchants.

Tu-zhong is also not as easily to wok-roast as #43 or Chang-ye. That is because its leaves are a lot more different in size and thickness than the other two. The roaster has to break down the roasting in a few more rounds in order not to break the leaves in a longer roasting. Resting between round let the remaining moisture in the leaves re-distribute. It helps the leaf tissues to maintain structural resilience longer. 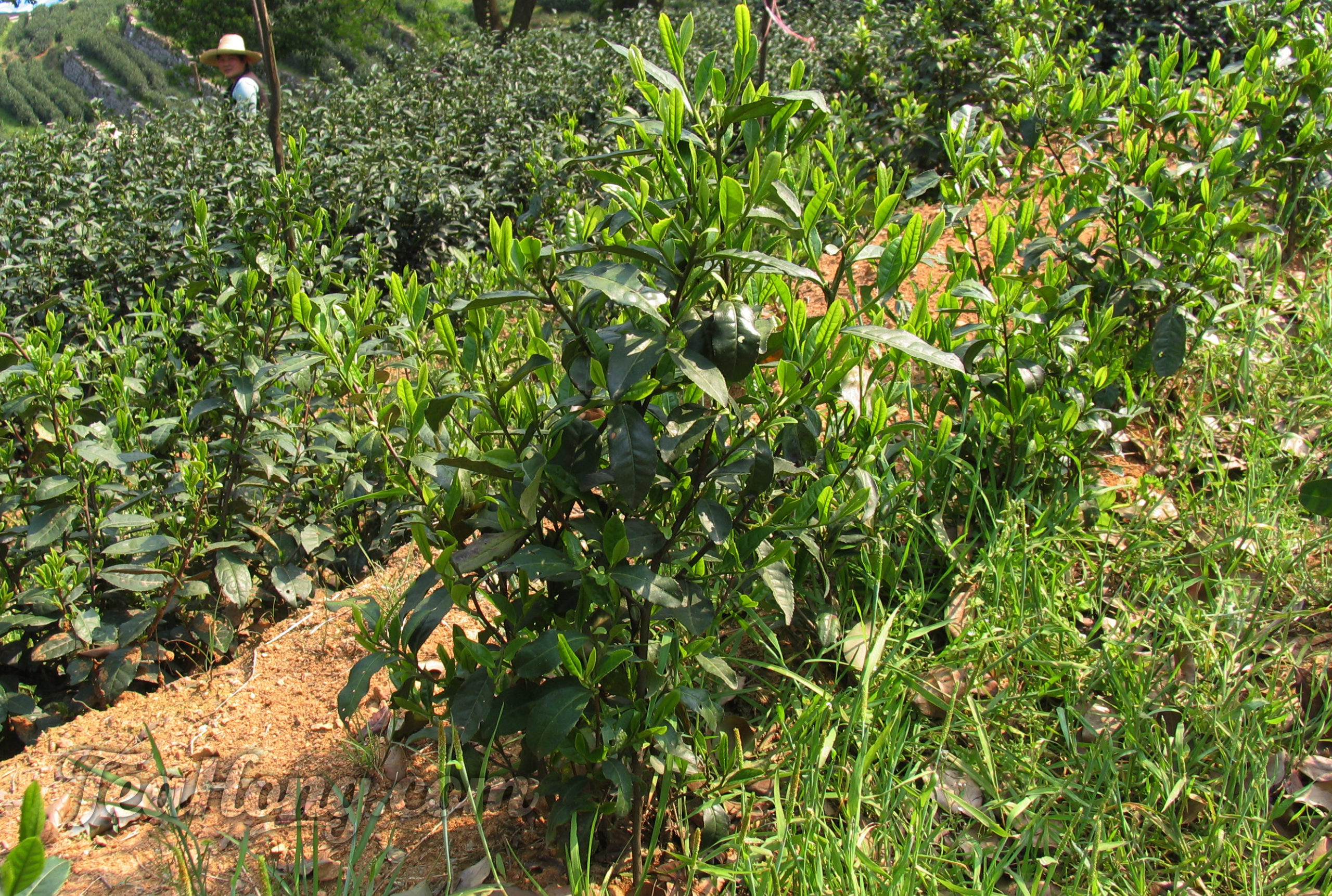 A Chang-ye bush at the edge of a terrace strip. Meijiawu, Hangzhou

We choose the right one

So you see, it’s a later tea, not as pretty and takes more efforts to roast.

Yet between the left and right tea ladles, we have chosen the right one. Not for the look, but for the epicurean qualities. The slight floral accent amidst the warm baked lentils and cookies aroma; that ting of light astringency that accentuate the complex umami and sweet aftertaste. The way a fine Longjing should be. The quiet enjoyment that a tea nerd like me crave for. 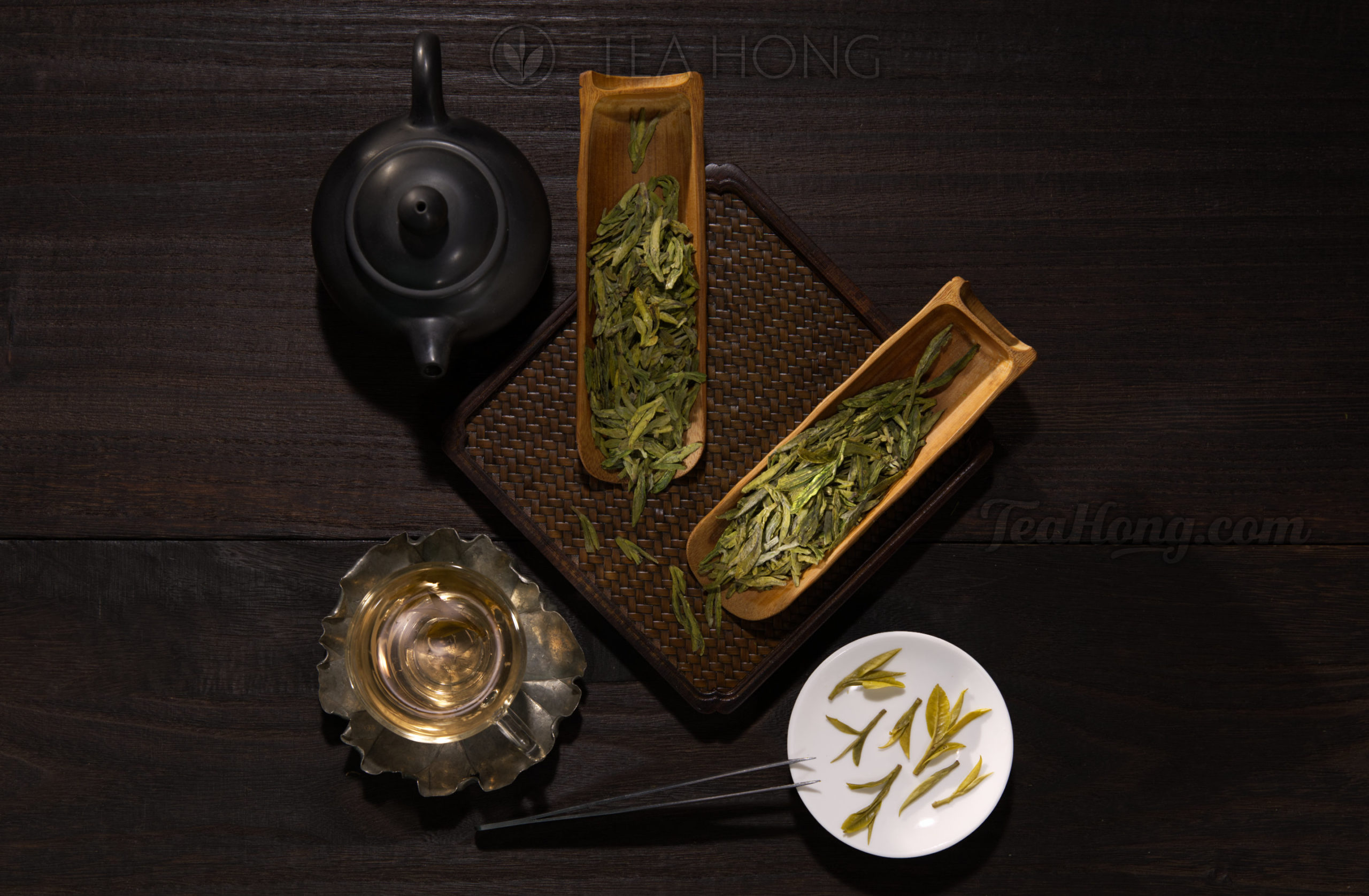 Yet between the left and right tea ladles, we have chosen the right one. Not for the look, but for the epicurean qualities. The slight floral accent amidst the warm baked lentils and cookies aroma; that ting of light astringency that accentuate the complex umami and sweet aftertaste. The way a fine Longjing should be. The quiet enjoyment that a tea nerd like me crave for.

Thank you for your patience

Tu-zhong is a medium late harvest cultivar. The earliest is usually March 25 but I usually wait a few days to get those batches between 28 ~ 30, sometimes even later. That is because those bushes planted in higher altitude often flush later than those in lower altitudes. And I prefer the farm workers to have worked a few days to warm up for the best leaves.

And then there is a lot of tasting. And then logistics. The the tea have arrived at my warehouse, bulk repacking and resting. A final tasting decides whether a batch can be released.

When I first entered the tea trade in the late 90’s, fellow traders often slighted me as a novice and not knowing the the inside operations of the trade. Surely I still do not practice many things that others are doing, and stick only to old practices that I think worth keeping, which may seem too stupid to follow in the perspective of profit gaining.

Staying with this kind of clumsy and late release of Longjing ( yes, it is even later this year than before, considering what I said in the newsletter ) is not good to fetch business. However, this is what this tea is and trying to bend the old practice would only give you a Wu-nu-zhao for a Longjing.

I love my tea and I respect it. And thank you for waiting for it with me.

BTW, if the taste of this Tu-zhong Longjing is a bit too much for you or whoever you want to give it to, get the Longjing First Flush instead, it’s made from Longjing 43.

What are green teas and what makes ours special