Tea cannot manifest its full self when improperly infused. The wrong leaf to water ratio, poor infusion ware, inappropriate water temperature, bad timing, as much as water quality would all limit, or even destroy, the potential of a tea.

I have written a few articles in my reference tea site about it, but feel the need to recap some of the key points here in my online shop.

Let’s start in this post with an internationally agreed infusion standard for professional tasting. 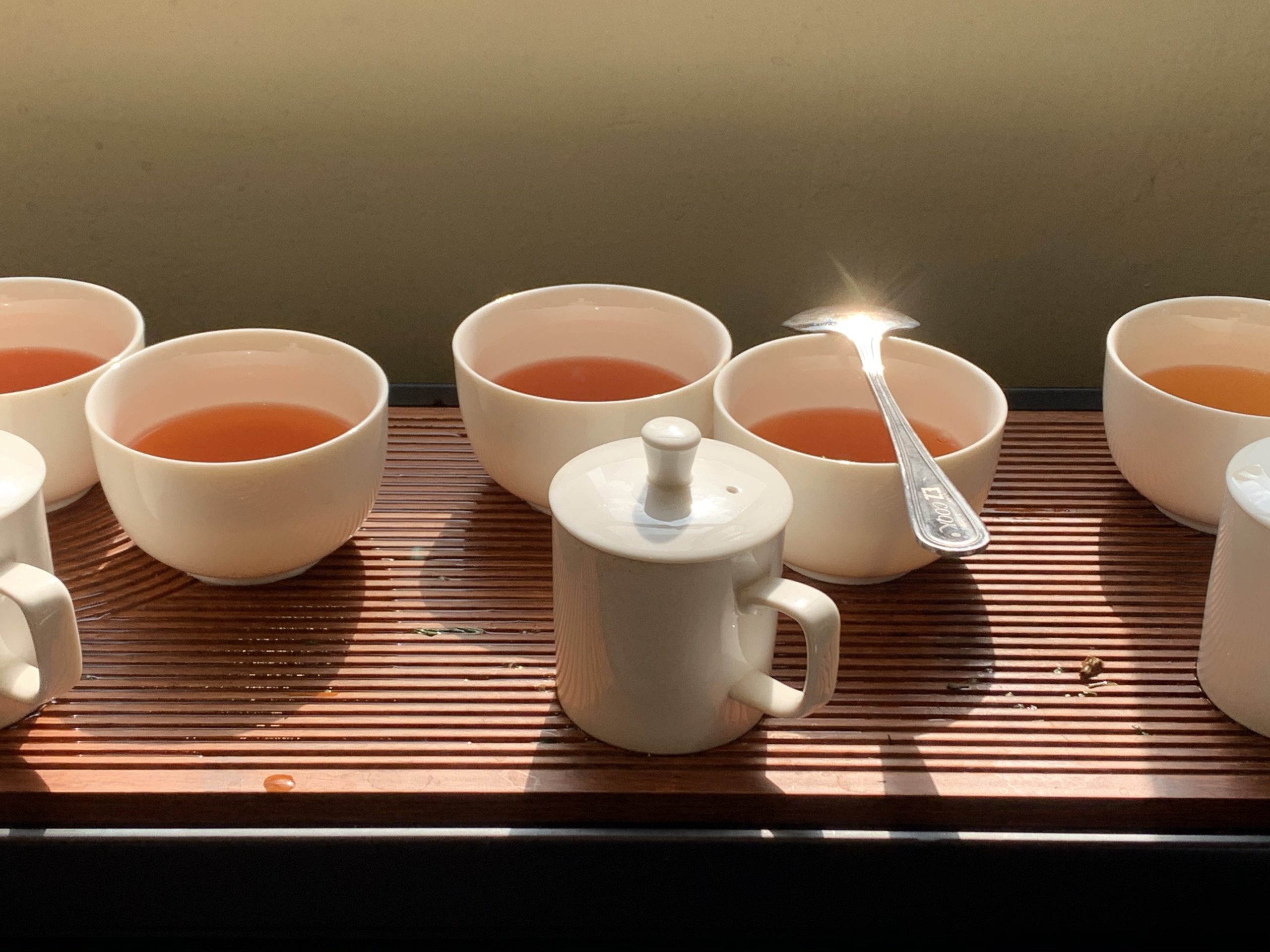 A few teas are being studied on an infusion table. The “teapots” we use daily are these taster’s mugs manufactured according to the ISO/BS standard

Tea — Preparation of liquor for use in sensory tests 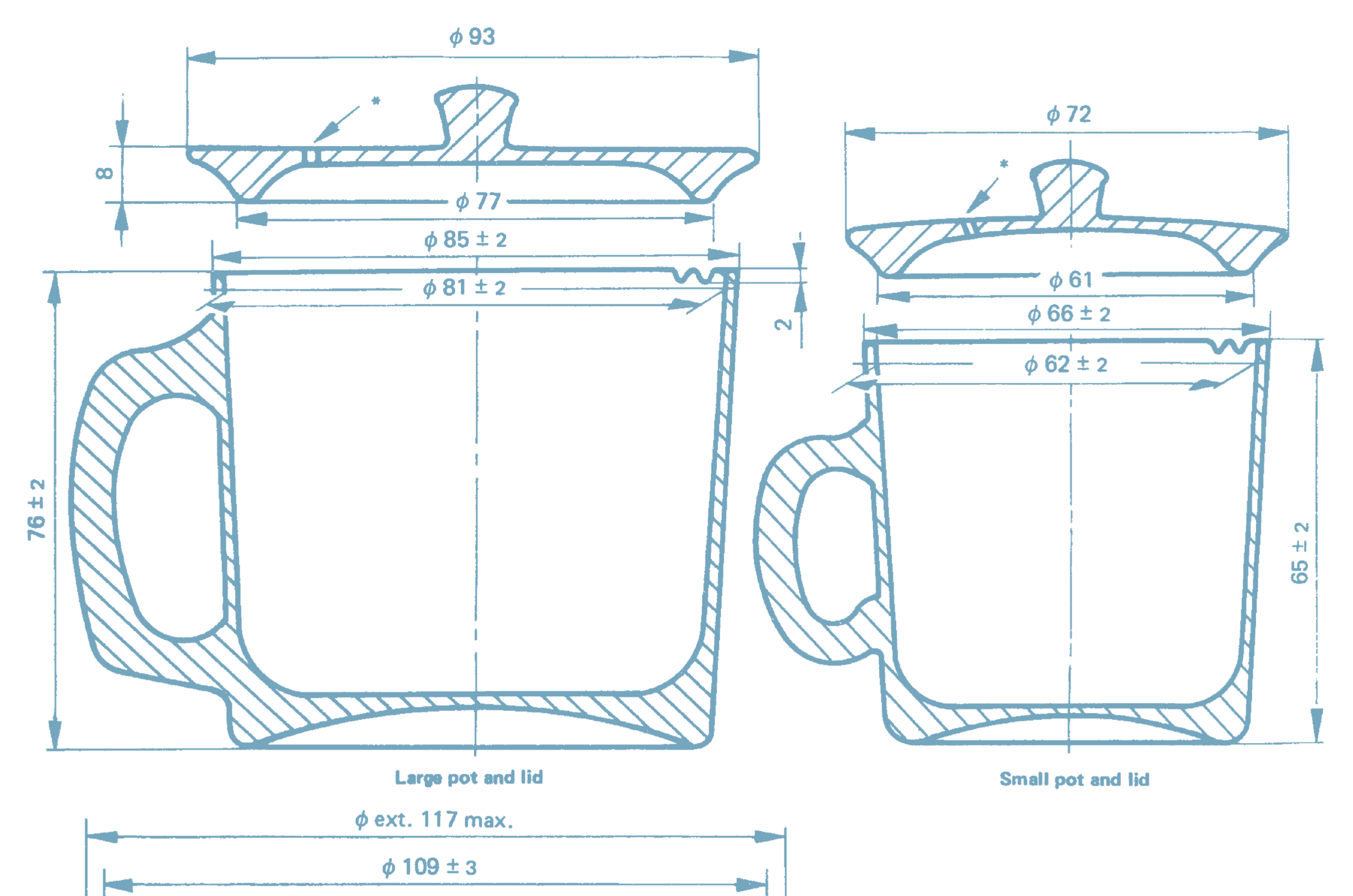 A diagram in the standard document describing the requirements for the pot for making the “brew” for tea liquor. Normally this is called the Taster’s Mug in the trade.

The original document is written in quite a cumbersome language, as are most other ISO / BS documents*. Below is a summary that I have found in Wikipedia, in easier language:

Note that the leaves are measured by weight, not by volume, contrary to what is believed in some household tradition and what’s been out there in social media.

I have always recommended a 5 min infusion time, rather than 6 asked in the standard. Too long an infusion can distort the delicate aroma in a lot of teas. The standard has been written largely for industrialised teas where delicate quality do not really exist.

Limitations of a standard for industrialisation

The resultant liquor, while good for experienced tasters to decipher a tea, can be a little strong for some tea for some people, and not adequate enough for some other teas. There are also teas that really shine when infused with modified parameters.

It will also make a fine green tea that requires a lower temperature taste very strong and a pu’er that requires boiling water tastes inadequate. Softer but very fine teas such as some oolongs from Taiwan that require a higher leaf to water ratio may taste bland. The hugely diversified world of fine tea in the 21st Century is beyond the industrialisation concept of the past millennium that this standardisation literature had been written for after all.

This is how the liquor is decanted into the tea bowl before tasting begins. This is made possible because there are “teeth” at the front on the brim of the mug.

However, and this is a big however, this standard is the most useful reference point for any tea. You may want it stronger, softer, more fragrant, less bitter, more astringent… each person has a preference, each tea has a nature of its own. Adapt from this reference point for each individual tea. This is a benchmarking step.

That said, a lot of teas, especially black teas, can be quite well interpreted using this standard.

The colour of the tea liquor we have in all of our product pages are photographed from infusions made in this standard. Without a standardised reference point, there can be no basis for a connoisseur to reinterpret a tea. It is from this where a true tea lover can master a tea and turn it into his/her medium, be it for entertainment, personal enjoyment, or a spiritual passage.

* ISO adapted the original British Standard document to produce its own, but is basically the same except for some more cumbersome concepts and language. They are both valid and equal and used in professional tasting after all. In the ISO site, they asks you money to see and download the document. The BS version, although older, is basically the same, and we have it linked in the above for you to download for free.

and quite a few other related topics are covered there as well.

By Tea Hong
For a limited time only. Free International Airmail Shipping for any purchase over 330 USD.